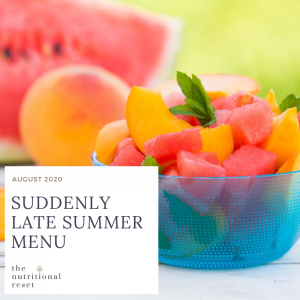 The title of this month’s menu is a riff off the song Suddenly Last Summer, by the Motels (yes, I was a teenager in the 80s).  Suddenly, it’s Aug 29 and summer is almost over and I had yet to get my August Menu of the Month out to you.  And so…Suddenly Late Summer.

Summer seems to have whizzed by super fast.  The good news is that farmers’ markets in late summer brim with delicious local produce.  So, on these themes, I have put together a menu that includes some of my favourites (melons, cukes, peaches) and is also super fast to prepare.  In fact, Shish Tawouk is commonly served in fast food restaurants in the Middle East.  And it isn’t often I will ask you to eat fast food.

Sign up here to receive the recipes in my Suddenly Late Summer Menu.  I hope you enjoy this menu and the rest of your summer!  As always, I invite you to share these recipes with family and friends.

Salad: Watermelon & Cucumber Quinoa Salad (this is beautiful, refreshing and can be prepared ahead…and it has been fantastic for helping make a dent in the watermelons I’ve been getting in my local food box)

Skewers: Shish Tawouk (these are super fast to prepare, just remember to allow for at least one hour of marinating time but ideally four hours to overnight)

Spice Blend:  Shish Tawouk Spice Mix (this takes only seconds if you have ground spices in your pantry…and I’d recommend grinding some of these from fresh where you can, e.g. allspice, black pepper, nutmeg and cinnamon…read on about the joys of freshly grated cinnamon)

Sweet: Pan Seared Peaches with Dukkah (peaches locally grown and eaten in season are heavenly…you can grill these as well)

Join The Nutritional Reset community here to receive this month’s menu today (as well as each month to come)!  And read on for some nutritional tidbits about a few foods featured in the recipes… 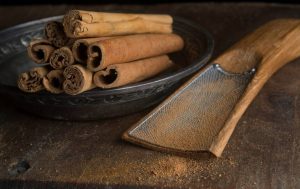 I discussed how cinnamon benefits blood sugar control in my Winter Warm Up Menu.  But cinnamon is a great all-season spice.  My sister-in-law just sent me a wonderful cinnamon grater and some true Ceylon cinnamon sticks.  I have been grating fresh cinnamon on pretty much everything ever since.  Most supermarket cinnamon is of the cassia variety, which is lower in quality and taste than true Ceylon cinnamon.  And cassia is higher in coumarin, which can be harmful in large doses.  So if, like me, you are tempted to use a lot of it, best to seek out true Ceylon cinnamon.  Not to mention research shows that Ceylon cinnamon has best overall anti-glycemic effects. 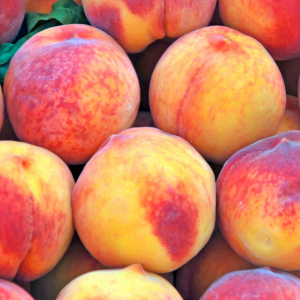 There is nothing quite as heavenly as a locally grown peach, eaten in season.  Since they aren’t shipped huge distances, they are picked when their flavour and nutrition are at their peak.  So be sure to eat only locally grown peaches!  Especially as an outbreak of Salmonella infections has been linked to peaches imported from the United States.  Check out Ontario’s Best Peach Picking Spots if you want to make a day-trip to forage your own.

I hope you enjoy the recipes in my Suddenly Late Summer Menu.  Sign up here to receive the download link for this latest Menu of the Month.  And if you want to cook more of your own food but don’t know what to make or have the time to organize your own menus and shopping lists, The Nutritional Reset offers a meal planning service.  It makes preparing tasty, nutritious meals a snap. Click here to find out more.