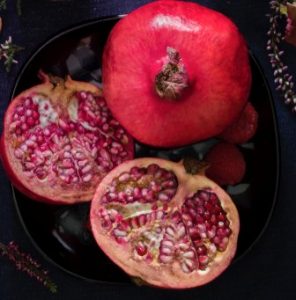 Could pomegranate seed oil be an effective treatment for menopausal hot flashes?  According to a 2017 study conducted in Germany, perhaps the answer is yes.  I recently attended a symposium at the Canadian College of Naturopathic Medicine entitled Advances in Women’s Health, presented by supplement company Nutritional Fundamentals for Health (NFH). One of the featured speakers was Dr. Tori Hudson, who provided an excellent update on recent research conducted into women’s health issues.  Dr. Hudson is an esteemed naturopathic physician and proponent of women’s health (in practice for over 30 years in Oregon), author of the Women’s Encyclopedia of Natural Medicine, researcher and Program Director for the Institute of Women’s Health and Integrative Medicine.

The pomegranate seed oil study she mentioned particularly caught my attention because I was preparing for my Meno-Party menopause workshop at Prashanta Yoga at the time.  Published earlier this year, Pomegranate (Punica granatum) Seed Oil for Treating Menopausal Symptoms:  An Individually Controlled Cohort Study tested the efficacy of pomegranate seed oil as a remedy for several symptoms of menopause, including hot flashes, disrupted sleep, depression, exhaustion and irritability.

Pomegranate seeds have a long history of use, both in the Ayurvedic tradition and in folk medicine practices of many Mediterranean countries.  Pomegranate seed oil (PSO) contains a significant amount of gamma-linoleic acid (GLA), an omega-6 fatty acid renowned for improving skin health, and it is a rich source of a unique omega-5 polyunsaturated fatty acid called punicic acid which is strongly anti-inflammatory.  And it also includes phytoestrogens, another reason why it is hypothesized to be promising in the treatment of menopausal symptoms.

This 2017 study involved 78 subjects, who had been experiencing a median of 48 months of menopausal symptoms.  Each had no treatment for 4 weeks followed by treatment of 1000 mg of PSO (divided in 2 doses) daily for 8 weeks.  Symptom severity was scored on a Menopausal Rating Scale at baseline, after the initial 4 weeks without treatment, then after 4 weeks of treatment and finally after 8 weeks of treatment.  The results showed that most menopausal symptoms were significantly reduced, with the greatest improvements seen in hot flashes, sleep quality, fatigue, irritability and depression.  Critically, however, there was no placebo control group in this trial, so no indication that these improvements might not solely have been the result of something akin to the placebo effect; that is, the subjects’ belief that the PSO treatment would work.   And this is a major shortcoming in this study.

When doing further research on this, I came across one similar study of a similar size from April 2012:  Pomegranate seed oil in women with menopausal symptoms:  a prospective randomized, placebo-controlled, double-blinded trial.  This type of trial is much closer to the research gold standard (although a cross-over design where the groups switched places such that each subject served as her own control would have made it even more robust).  In this study, the dosage was significantly lower at only 30 mg of PSO per day.  The group was divided in half and given either the PSO or a placebo for 12 weeks, with neither the subjects nor the researchers knowing which group received which (i.e. double blind).  The study found that, in the case of hot flashes, both groups experienced a significant reduction (> 25%) from baseline (again, perhaps the women’s belief that the treatment would work had an effect) but that the reduction experienced by the PSO group, while greater, was not significantly greater from a statistical point of view than the reduction experienced by the placebo group.

This study was 1 month longer in treatment duration than the most recent one, so it isn’t likely that duration was the reason that the PSO in this study showed less efficacy.  It is possible, however, that the much stronger therapeutic dosage of the most recent study may be required to get the desired effect.  Only by repeating the 2017 trial in a randomized, double-blind, placebo-controlled manner will we become closer to knowing the answer.

So, while the jury is still out as to whether PSO is effective, wouldn’t it be sweetly ironic if consuming the oil of pomegranate seeds, an act which condemned Persephone of Greek-mythology-fame to living in the underworld for three months each year, might douse our own menopausal “hell-fires”?