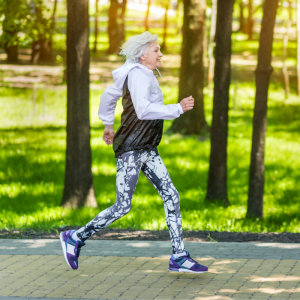 Sometimes I have to think hard to come up with topics for my blog posts.  Other times they come to me organically, through a confluence of events.  In this case, it was a movie, a comment from a friend, two books and my birthday bucket list item that led me to this one:  It’s Never Too Late…to Exercise.

The movie was Edie.  The comment from a friend was “I’m too old to start running”.  The books were The Happy Runner and Older, Faster, Stronger.  And my birthday bucket list item: run the Scotia Toronto Waterfront Half Marathon Virtual Race to fundraise for the Sunnybrook Foundation.  So, with that as my preamble, let’s delve into how these morphed into this post on why it’s never too late…to exercise.

I watched the movie Edie on Amazon Prime about a month or so ago.  Without giving away too much of the plot, it is about an octogenarian who regrets not having gone on a climbing trip with her father in the Scottish highlands many moons before.  One evening, shortly after being widowed, she plunks herself down at a table in her local chip shop and asks the proprietor if she’s too late for some chips.  He smiles and says, “It’s never too late for you, Edie”.  Her eyes light up and she thinks perhaps it isn’t too late, after all, to do that climb she wished she’d done with her father. 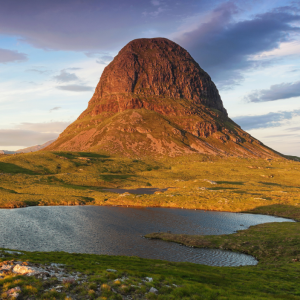 And so, with a renewed sense of purpose, off she goes.  And she climbs Suilven (pictured at right).  Better yet, the actress, Sheila Hancock (who was about 84 at the time), actually did trek up the mountain herself and claims to have been the oldest person to do so.  I found the film endearing and, with my 55th birthday looming large, uplifting to think that I might have 30 years of healthy activity yet in front of me.

The comment from a friend:  “I’m too old to start running.”

I’ve heard this comment not only from this particular friend but from several people.  Now she mentioned running but you could insert any sport here, really.  Lots of people assume that age means that we must inevitably slow down and stop.  Nothing could be further from the truth.  But it is important to go about it intelligently (especially if new or newly returned to exercise) and that is where the books come in. 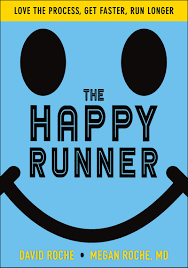 First, off, a confession.  My chiropractor, the wonderful Dr. Brittany Moran at The Runner’s Academy, recommended this book.  And, let me tell you, I wish I had come across both her and the book a long time ago.  Why?  Because I was not running in an intelligent way at all, which is how I ended up getting injured and meeting Dr. Brittany in the first place.

It all started with an app and some wearable tech.  Using the app I was always choosing high intensity runs (my fault, not the app’s), figuring faster is better, right?  The wearable tech (an Apple Watch and, subsequently, a Garmin Forerunner 245 running watch) proved to be enablers.  While both of these provide useful data, they can also get you focused too closely on numbers and not enough on listening to your body.

More is not always better

I find that Apple Health, in particular, just keeps egging me on to do more and more and more!  My Garmin run program at least built in recovery days but I wasn’t very good about doing what I was told.  I often ran longer than I was supposed to and at a faster pace than indicated.  In fact, my idea of improvement was to go faster each run than the run I did the day before.

I discovered, the hard way, that this is not a wise approach.  More is not always better.  It took about 18 months but I literally ran myself into the ground.  I got slower and slower, my fitness stats were declining and I simply didn’t understand why all this “practice” wasn’t making perfect.  And then I injured myself.  It was a classic case of overtraining syndrome.

So I went to Dr. Brittany Moran to fix me up and get me running again.  But this time in a safer way.  The book she recommended, The Happy Runner, changed my way of thinking entirely.  My goal is no longer about besting my personal bests every run.  After all, it is inevitable as I age I will slow down.  My goal is now to be able to run, happily and healthily, into my golden years and (as the book’s subtitle mentions) to “love the process”.

Easy means easy, not the absence of pain

I particularly connected with the chapter entitled “Easy Means Easy, Not the Absence of Pain”.  My Garmin run program always included “easy run” days but I never truly understood what was meant by easy.  I was more in the “absence of pain” camp here.  “When you get joy out of pushing yourself, what is to stop ‘mission creep’ in your daily run?”, ask the authors.  Yes indeed.  That was my problem.  Enter “the talk test”.  Easy means you should be able to carry on a conversation while you are doing it (most of the time).  I’d also recommend a heart rate monitor.  So if you wish to start running (or any exercise), start easy.  And first, start by clearing it with your doctor.

Not an exercise “how to” but a “please do”

But this post is not meant to be a “how to” for running or any other exercise.  Instead, my goal is to impress upon you that:

There are so many women out there proving the primary point.  So now on to a few inspirational stories, which I got in spades from the second book.

I loved that this book was written by a Canadian and a foodie to boot!  The author has good news for all of us:  “Masters athletes are proving that as much as 50 percent of age-related decline, maybe even 70 percent, is due to deconditioning – losing physical fitness by doing nothing or very little – rather than aging.  When scientists probe the bodies of endurance athletes, they discover 80-year-olds with muscles and cardiac capacities akin to those of 20-year olds.”  Hallelujah!

As promised, this book is “an engrossing narrative sure to inspire women of all ages”.  Here are brief summaries about just a few of the inspiring women you will “meet” in this wonderful book (all quotations are from the book unless otherwise indicated). 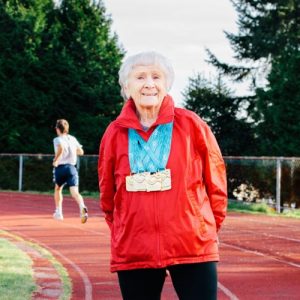 Canadian Olga Kotelko started her track career at 77.  “In her 90s, Olga had muscles comparable to someone 3 to 4 decades younger”.  Olga says “she has no idea what being in her 90s should feel like – she claims to have the same energy level she had in her 50s”.  By the time she passed on, age 95, Olga held more than 30 Masters track records and had won more than 750 gold medals in her age category. She won ten gold medals at her last World Master appearance just a few months before she died.

Running, Sister Madonna was told, works for the mind, body and soul.  That spoke to her.  She “earned her nickname for the roughly 300 triathlons and 45 Ironmans she has tackled since taking up running at age 48”.  At age 82, she became the oldest person in the world to complete an Ironman at the Subaru Ironman Canada on August 26, 2012 (finishing her race in 16:32:00).  By doing so, she opened up the category for the 80-pluses. While that was her last Ironman, she is still competing at 91. 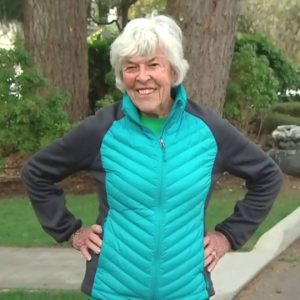 And then there is the story of yet another Canadian, world-record marathoner Betty Jean McHugh – or BJ”.  She took up running at the age of 50.  “At 80, BJ ran a 4:36, better than the average finishing time of 30- to 34-year old women in the NYC Marathon”. At 90, she ran 6:47:31 at the 2017 Honolulu Marathon, taking more than two hours off the previous W90 record of 8:53:08, according to the Association of Road Racing Statisticians.  As for “the common belief that running is hard on the joints….In her hips, which are particularly susceptible to fracture in frail seniors, BJ has retained the bone density of a 30-year-old.” 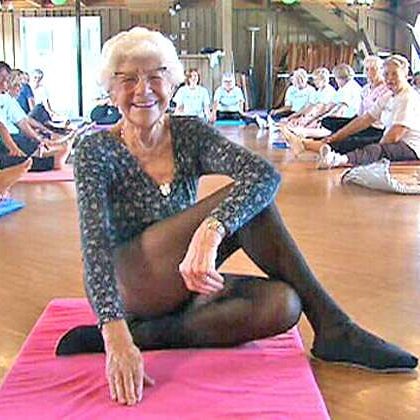 At the time the book was written, Ida was the world’s oldest yoga instructor, as proclaimed by Guiness World Records.  She took up yoga at age 50 and was still teaching in Ontario at 97.  “I don’t know what pain feels like”, she says. “To stay fit, to age well, her advice is simple: ‘Keep moving.  Even if it is difficult.  It shouldn’t hurt, but you should just try to do a little bit more each time.”  When the author asked how long she thought she might live, she replied “I think about 4 more years”. Ida Herbert passed away peacefully in April of 2020, at the age of 103.

Now I’m not even remotely in the league of the women above.  But that isn’t the point.  The point is that reading their stories inspires me to push past what I thought were my limits.  I never thought I had the staying power for endurance running.  Yet now I’m in week 19 of a 23-week Garmin half marathon training plan for the Scotia Toronto Waterfront Half Marathon Virtual Race (hopefully they won’t mind me using their logo here, as it is all in aid of a good cause).

I’m calling it my “21 in ’21” (a half marathon is a snick over 21 kilometres).  But this time I’m doing it right.  To prevent my usual “type A-itis” and “mission creep”, I don’t have a time goal.  Instead, my goal is to go the distance and, in the process, raise funds for the Sunnybrook Foundation (particularly their cancer and cardiac care units).  To make sure I’m a happy runner, I’m giving myself permission to be slow and enjoy the process.  And I am!  I’m slow.  But I’m enjoying it too!  If you wish to donate to the cause, you can find my fundraising page here.

“Your finish line is the same as everyone else’s.  Ashes to ashes, dust to dust.”

This is one of the main tenets in The Happy Runner – enjoy the process!  Be as healthy and happy in your body as you can be and always think in terms of the long run.  And it doesn’t have to be about running!  I happen to like it because you can do it anywhere, in pretty much all weather, in company or alone and it doesn’t require expensive gear.  But feel free to choose something that, literally and figuratively, moves you.

I thought I’d close with a final excerpt from a cookbook I’m reading now called Run Fast. Cook Fast. Eat Slow. by Shalane Flanagan and Elyse Kopecky.  Food was my first love but I’m putting these in the order they appear in the book.  I think the similarities go a long way to explain my love of running.

Food has the power to heal.
Food unites.
Good food brings people together.
Food is the heartbeat of communities.
Real food nourishes our bodies and minds.
Food is health.
Health is happiness.
Cooking for others is the greatest gift.
Cooking is meditative and restorative.
Cooking is hard work.
Hard work tastes amazing.
Food should be enjoyed.