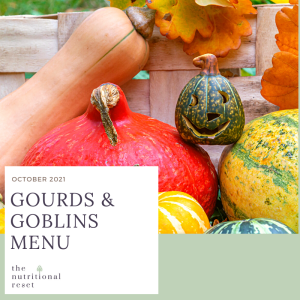 My Gourds & Goblins Menu is a Jekyll & Hyde character.

The Jekyll version is served pretty much as described in the recipes. It’s a heaping harvest helping of carbo-comfort foods featuring a gaggle of gourds (namely pumpkin, butternut squash and zucchini).

But with some sleight of hand and the spooky styling suggestions at blog-bottom, you can turn it ins-Hyde-out into a fiendish feast for your ghoul-friends! It’s double, double the fun without too much toil or trouble.

Served either way, my Gourds & Goblins Menu is devilishly good at disguising veggies.

This dish is both gluten-free and vegan, thus also dairy-free. This is why ‘cheese’ is in quotes…as there is no actual cheese in it. The ‘cheese’ flavour comes from the nutritional yeast, so it is an integral part of the recipe and should not be omitted. It is easy to find at health food stores. Nutritional yeast is the same species as baker’s or brewer’s yeast (Saccharomyces cerevisiae) but unlike the latter, the yeast cells are killed during the manufacturing process. Nutritional yeast can be found in most vegan pantries as it is a complete protein and is often fortified with B vitamins, particularly B12, which only occurs naturally in animal products. I’m not vegan but I keep it on hand to sprinkle over popcorn. It also adds a nice umami flavour stirred into soups and stews and is great for making quick and ‘cheese-y’ scrambled eggs.

One caveat in case you plan to prep the Mac n’ ‘Cheese’ in advance for a party:  keep the sauce/macaroni/crumbs separate until just before reheating. Or make extra sauce to add just before reheating. Otherwise, the sauce does a bit of a disappearing act (that is, it gets absorbed into the macaroni and loses some flavour). I like to broil it for 2-3 minutes for a nice toast at the end. But watch it closely – if you broil it for even just a wee bit too long you’ll have a burnt offering on your hands. For a frightful flourish, serve it in bell pepper jack-o-lanterns (instructions below). Yes, my pretties, you’ll get even more veggies in with these DIY maleficent mac-o-lanterns!

Whether cooking up the Jekyll or Hyde version, feel free to reach out if you have any questions, comments or grave concerns. 😉 I hope you enjoy goblin’ these recipes up!

SIgn up here to receive the recipes in the Gourds & Goblins Menu.

Apéritif: Classic Virgin Sangria (Served per the recipe, it is a harmless harvest cranberry cocktail. But we musn’t forget the word sangria means bloodletting in Spanish, so take a boo at the sinister sip tips below.)

Soup: Spider Web Pumpkin Soup (I’ve dusted the cobwebs off this one from a menu I put out in pre-pandemic times. For the harvest version, omit the spiderweb. But feel free to add curry powder or cayenne if you like it hellishly hot.)

Pasta: Vegan Mac n’ ‘Cheese’ (This is devilishly good served with a tempest-tossed “blood red radicchio and endive of the world salad”. The bitter leaves are a killer counterpoint to the richness of the pasta.)

Dessert: Dark Chocolate Zucchini Cupcakes (For some, the thought of zucchini in cupcakes is scary enough. But if you dig the demonic decorating ideas down below you can make these double chocolate delights even darker. If you wish to spike the suggested whipped cream topper, I recommend heavenly Frangelico or the Devil’s rum.)

Join The Nutritional Reset community here to receive this month’s recipe collection today (as well as each month to come)! 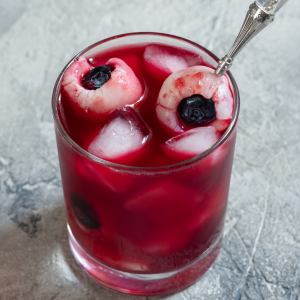 Turn the sangria into a truly sinister sip by floating a few “bloodshot eyeballs” (each made from a lychee nut with a blueberry in the centre) on top.

If you prefer an alcoholic version, you could brave this Blood Orange Sangria recipe.  Moderation, please, lest you succumb to a deadly hangover. 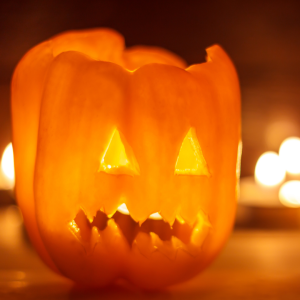 Bring a cauldron (or large pot) of salted water to a boil and fill a big bowl with ice water. Behead the the peppers (reserving the tops) and gut them (remove the seeds and membranes). Scald peppers and their tops in the boiling water 2-3 minutes (until just tender) and then shock them in the ice bath until cool.  Then remove and, using a super sharp knife, carve a jack-o-lantern face into one side of each pepper.  Fill peppers with bubbling hot mac n’ ‘cheese’ and serve your maleficent mac-o-lanterns. 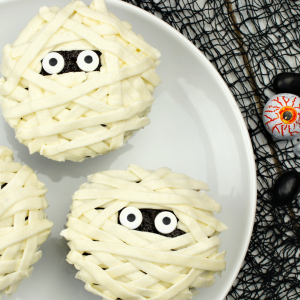 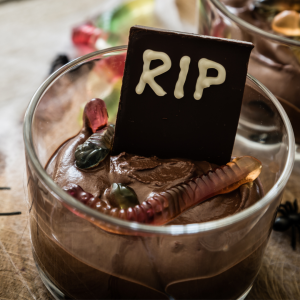 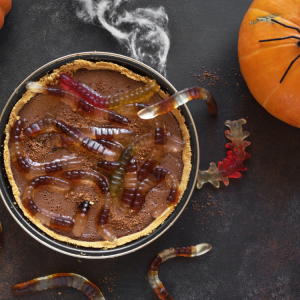 I hope you enjoy my Gourds & Goblins Menu.  Sign up here to receive the download link for this latest Menu of the Month.  And if you want to cook more of your own food but don’t know what to make or have the time to organize your own menus and shopping lists, The Nutritional Reset offers a meal planning service.  It makes preparing tasty, nutritious meals a snap. Click here to find out more.