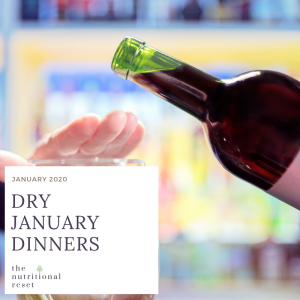 Dry January, a one month alcohol-abstinence campaign which started in the UK in 2013 with 4,000 people, has officially become a thing.  By 2018, four million people participated in dry January.  And this year Whole Foods Market has named “zero-proof drinks” as one of its Top 10 Food Trends for 2020.

This is interesting in the year that also marks the 100th anniversary of Prohibition.  Then, the prospect of an alcohol-free existence was met with a more sober/less enthusiastic response.  And also a less sober one – it backfired greatly and drove drinking under the table.  Apparently Mary Pickford’s mother bought up the stock of an entire liquor store before the sale of alcohol became illegal to seize upon a loophole allowing folks to consume alcohol already in their homes.  Talk about proactive!

Think of it as your habit-busting boot camp

I think Dry January is a good idea.  This is provided you don’t use it as an excuse to go “overproof” the rest of the year.  It’s wise to abstain for a few weeks from anything you are indulging in a wee bit much.  This might be alcohol but it might also be refined carbs or cheese or sweets.  It allows your body to reset and gives you a chance to see how you feel without it.

Does your sleep, energy, weight, skin or mood improve, for example?  If so, you may find yourself electing to abstain more often.  As Try Dry (the Dry January app) says, think of it as “your habit-busting boot camp to help you get back in control year-round” and an opportunity to reset your relationship with alcohol.

I personally find it easier to abstain when I eat foods that I don’t associate as strongly with alcoholic beverages.  Put a grilled steak, spaghetti bolognese or duck confit in front of me and I will crave red wine.  But Asian dishes, meatless meals or foods that are sweet and savoury have me happily reaching for non-alcoholic options.

So, in the spirit of Dry January, here are three such dinners (because drei is the German word for three and I can’t resist a pun).  I have also suggested zero-proof beverage pairings in the hope of inspiring you on a journey with the sober-curious, if just for January.  Or at least the rest of January…  😉

Sign up here to receive the recipes and have a very happy, healthy – and dry – January!

Coconut Cod & Spinach with Rice (This is great with a steaming cup of genmaicha, a Japanese brown rice green tea that is full flavoured and nutty.  I recommend using brown basmati rice in this dish and any firm, white fish fillets will do if you don’t have cod.  Haddock is a good choice.)

Chickpea Tikka Masala with Couscous (A mocktail of Seedlip Spice 94 and Fevertree Naturally Light Indian Tonic Water with a twist of red grapefruit peel is fabulous with this hearty Indian Curry.)

Turkey Pineapple Quinoa Bowl (Ginger kombucha cut with sparkling water enhances the ginger in the dish without competing with the sweetness of the pineapple; ginger tea would also work well.)

Join The Nutritional Reset community here to receive this month’s menu today (as well as each month to come)!

I hope you enjoy these Dry January Dinners.  Sign up here to receive the download link for this latest Menu of the Month.  And if you want to cook more of your own food but don’t know what to make or have the time to organize your own menus and shopping lists, The Nutritional Reset offers a meal planning service.  It makes preparing tasty, nutritious meals a snap. Click here to find out more.